skip to main | skip to sidebar

An evening with Greg Shields

I was delighted to be invited to a Q & A with former Addick, Greg Shields, last night. The call had been set up by supporter group 'Charlton Fans in Scotland' together with support from the Charlton Athletic Supporters Trust (CAST). It was their first player session and it was encouraging to hear post-Greg discussions about getting season tickets, organising socials and travelling together down to games. 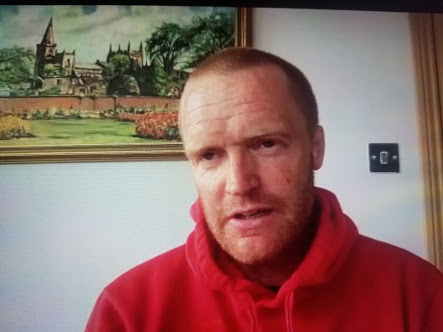 Greg was a player of whom I have fond memories. Not only a fellow Scot but one very much in the national mould of the honest pro, capable, direct and a no-nonsense defender who was hugely reliable. He reminded me very much of the brilliant Mark Reid.

Prior to the call I looked-up his record up and was quite surprised to see he only played 25 times for us between 1999 and 2002. He certainly made a far bigger impression than that.

Greg told us about how he came to the Valley with his Agent for a midweek meeting with Alan Curbishley. He had no intention of signing immediately but he was so impressed with the Valley, Sparrows Lane and what Curbs had to say, that he committed that day. By his own admission he had "no idea what a big club Charlton were." Having been at Rangers as a youngster (7 appearances) he was surprised that we had a far more impressive training set-up.

He was 23 and newly married. The Shields' settled in Petts Wood and their first child (of three) was born at Farnborough Hospital. Greg spoke enthusiastically about his football at Charlton, the thrill of winning promotion and playing in the Premiership. It was the highlight of an 18-year playing career that took him back to Scotland before finishing at Carolina Railhawks (now North Carolina).

Listening to Greg talk about his team-mates from those days was a reminder of just what a strong squad of players we had at that time. Those full-back berths alone were contested by Greg Shields, Steve Brown, Anthony Barness, Chris Powell, Paul Konchesky and Luke Young.

When asked to name three players from his playing days he would pick for his Dumfermline side today (he is the Assistant Head Coach), he was quick to discount his Rangers days because he was so young and he was never established, so Paul Gascoigne was out. Instead he jumped at Mark Kinsella and Clive Mendonca. Kinsella for his ability to change a game, his drive and leadership - Super Clive for his finishing of course. He struggled for the third but eventually gave us Graig Brewster, the Scottish striker who made a long career playing for a host of clubs on the east side of Scotland, including Dundee United, before five years at Ionikos in Athens. Dean Kiely also got a mention - Dean signed for us act the same time as Greg and was a one-time room-mate.

I remember attending a Q & A many years ago at the Valley after Greg had moved on and he sounded critical of Alan Curbishley at the time concerning the end to his Charlton career. It was revealing then to hear Greg talk about the end of his Charlton days with the benefit of another 15 years or so. He was very clear that he regretted leaving and that he realised that he made a mistake at the time by jumping ship. He had been out for awhile with an "ACL-type" injury and didn't immediately get back into the side when he was ready to resume. Luke Young had been signed and Greg feared the writing was on the wall ("Luke was  great player who went on to play for England"). Not wanting to play reserve football he opted instead for a permanent move to Kilmarnock (he had been there on a short loan spell).

He also recalled his two goals for us, the first against Birmingham at the Valley (his first ever), when he played a one-two and got into the box before firing under a challenge from Darren Purse and realising "I am scoring a goal here!" His second was a cracking strike I remember well against Forest, also at the Valley. Greg told us he had boot sponsorship from Fila at the time and was mortified when the TV highlights showed him sliding towards the camera in celebration with his Nike boots in full view.

After Kilmarknock and another five years at his beloved Dumfermline, Greg ended his career in the US where he played and coached for ten years. As much as he regretted not making a bigger fight at the time to extend his Premiership career, it was clear that he loved every minute of life in the US and that it was a great way to finish his playing career for him and his family. He told us that he wishes he had reached out to Gavin Peacock whilst there. When first at the Valley he was put under the wing of old-pro Gavin and had roomed with him early on. He was so in awe of the experienced Peacock, that at night he would sleep in bed with all his clothes on because his room-mate liked to sleep with the window open.

Greg is back in his old house in Dunfermline. It was very good of him to give up an hour and a half of his evening (he happily over-ran the slot) to a relatively small group of fans of a football club he played for twenty years ago. He is not looking too far ahead but enjoying his coaching and taking one day at time. He looks a happy man.